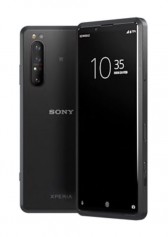 Sony has created a new lineup of phones designed specifically for professionals rather than consumers. The new Xperia Pro imagines a specific use case for 5G: broadcasting live video in the field. To that end, it has both mmWave 5G and an HDMI input for connecting to professional video cameras. Even though Sony Mobile has “de-emphasized” the US market in its general strategy, the Xperia Pro’s specs list 5G frequency band support specific to US 5G networks: bands 2, 5, 66, 260, and 261. Sony has previously worked to have its flagship phones certified by Verizon, and the Xperia Pro fully supports Verizon’s 5G and 4G network bands. The Xperia Pro has 5G mmWave antennas on all four sides for maximum mmWave connectivity. The Pro also has high-end video capture built in, including 4K HDR video at up to 60 fps, Optical SteadyShot, and SteadyShot with Intelligent Active Mode (5-axis stabilization). Otherwise, the Xperia Pro has specs that are nearly identical to the Xperia 1 II that was also announced today, except for more storage (512 GB) and no wireless charging. Release date and pricing are yet to be announced.