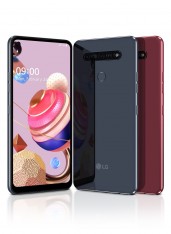 LG today announced three new models in the K series, the company’s most affordable series of phones. All three phones share a similar design, with a 6.5-inch screen filling the front and four cameras plus a fingerprint reader on the back. The four rear cameras on each are: standard, wide, macro, and depth. All three also have a 4,000 mAh battery, NFC, USB-C, dedicated Google Assistant button, and a memory card slot.