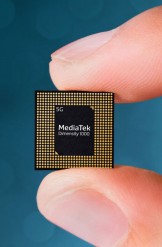 MediaTek has revealed that its first SoC with integrated 5G modem and high-end processor will be called the Dimensity 1000. The company revealed the first set of details on the chip in May. Now that it has a name, MediaTek has revealed additional details of the SoC. It’s fabricated using the latest 7nm process and is designed for “premium and flagship” phones. The 5G modem component supports SA (stand-alone) and NSA (non-stand-alone) 5G networks, as well as DSS (Dynamic Spectrum Sharing) that allows 4G and 5G to efficiently share the same frequency band. It also supports 5G carrier aggregation, which enables downlink speeds up to 4.7 Gbps and seamless handovers as users move around. It also supports dual 5G SIMs, which MediaTek claims is a first. The processor part of the chip includes a five-core image signal processor (ISP) to power cameras up to 80 megapixel at 24fps. Its AI processor assists with camera functions, offering features like multi-frame video HDR, which MediaTek claims is another first. The chip also supports Full HD+ displays with refresh rates up to 120Hz, and 2K+ up to 90Hz. The Dimensity 1000 only supports 5G in sub-6 GHz frequency bands, not mmWave. By the end of this year, AT&T, T-Mobile, and Sprint will all offer sub-6 GHz 5G networks with broad coverage. The first devices powered by the Dimensity 1000 will ship in the US by the end of this year, which is earlier than previously announced. The new Dimensity brand will include a whole line of chips with integrated 5G.