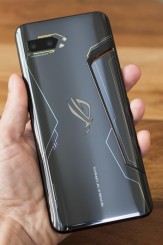 The Asus ROG Phone II is a beast of a phone. It’s loaded to the gills with top-end specs and unique extra features that cater to hard-core gamers. But some of its wilder specs — like its massive 6,000 mAh battery and huge screen — might appeal to casual gamers, and even people who don’t game on their phones at all. Other sites will tell you how this phone stacks up for gamers; we’re going to focus on whether it makes sense for anyone else. Here are our thoughts after using it daily for two weeks.