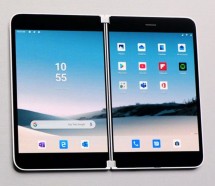 The Microsoft Surface Duo is a unique dual-screen device running Android that functions as a foldable tablet and mini version of the company’s just-announced Surface Neo. Its dual 5.6-inch displays are joined by a 360-degree hinge that lets it fold with the displays facing either in or out. When folded, it’s far wider than most phones, making it a slightly distinct category of device. It can run two apps side-by-side, use the second display as a keyboard, or function like one unified tablet. It won’t be available until fall 2020.