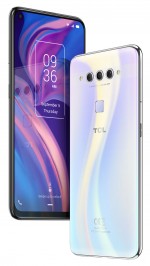 TCL Communication — the company behind Alcatel, BlackBerry, and Palm phones — is branching out with a new line of phones under its own TCL brand. The first model is called the Plex and is higher-end than most Alcatel-branded phones. TCL will also introduce 5G and folding phones under the TCL brand next year, making it a decidedly higher-end brand for the company. The Plex has a full-HD+ 6.53-inch display on the front and triple rear cameras. The display is a “Dotch” LCD panel made in-house by TCL; it achieves 90% screen-to-body ratio thanks to a hole-punch design for the selfie camera. The display also automatically adjusts to ambient light color. The main camera is a 48-megapixel Sony sensor. It’s assisted by a dedicated 2-megapixel (1080p) low-light sensor for video. The third camera is a 16-megapixel wide-angle camera. The unique dual flash design puts a separate LED on each side of the camera lenses. The Plex is powered by a 3,820 mAh battery, Qualcomm Snapdragon 675 processor, 6 GB of RAM, and comes with 128 GB of storage plus a memory card slot. It also has a fingerprint reader on the back, headphone jack, and USB-C connector supporting Quick Charge 3.0. The version announced today features Cat. 6 LTE supporting European frequency bands. It will launch by the end of this year “starting with select markets” in Europe at a recommended retail price of €329.