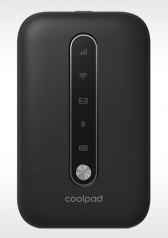 T-Mobile today launched the Coolpad Surf, its first mobile hotspot device to support newer LTE bands 71 and 66. Band 71 — AKA 600 MHz — became a large and important part of T-Mobile’s network in 2018. Band 71 provides much-needed extra capacity in dense urban areas, and extended coverage elsewhere. T-Mobile has been offering phones with band 71 since November 2017, but before today, T-Mobile’s only mobile hotspot device was the Alcatel Linkzone, which only supports older LTE bands 2, 4, and 12. The Coolpad Surf has a 2,150 mAh battery that should provide 5.3 hours of continuous use. It sells for $72, or $3/month for 24 months.