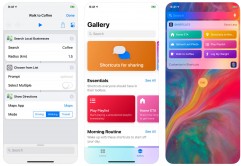 Apple today pushed out a significant update to the Shortcuts app, which lets iOS device owners make more connections between Siri and actions. For example, new shortcuts let people ask for the current weather or the weather forecast, easily set alarms and timers, convert between a variety of units and measurements, as well as view the most recent batch of imported photos. Apple says running shortcuts from HomePod via Siri will now automatically play back from the HomePod using AirPlay, rather than nearby iOS devices. Shortcuts 2.1 also includes bug fixes. The app is free to download from the iTunes App Store.