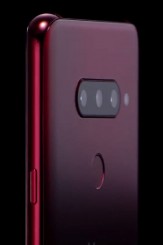 LG has revealed several aspects of its forthcoming flagship phone, the V40 ThinQ, in a promotional video shared in its home market of Korea. The main points revealed by the video are the V40 ThinQ’s 6.4-inch screen and five-camera array. LG says it has reduced the bezels as much as possible, allowing the V40 ThinQ to boost the size of the screen compared to the V30/35 while keeping the phone’s dimension’s in check. Based on visuals shared in the video, the V40 has three cameras on the rear and two cameras on the front. The phone features a metal-and-glass design, with glass on front and back. LG says the rear panel, in particular, has been sand-blasted for smoothness and resistance to scratching and fingerprints. Other aspects of the phone include a rear-mounted fingerprint reader. LG plans to more fully announce the phone at an event in New York City on October 3.