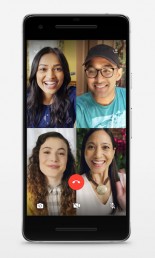 WhatsApp has made it possible to make group voice and video calls through its mobile app. The app has supported one-on-one voice and video calls for some time. This new features lets people connect up to four people on a single call. WhatsApp says the features requires users to add participants one at a time via the new “add participant” button that appears in the app. Group calls are encrypted end-to-end, just like one-on-one calls. WhatsApp says the feature should work reliably around the world and in various network conditions. The new WhatsApp is available from the Google Play Store and the iTunes App Store.