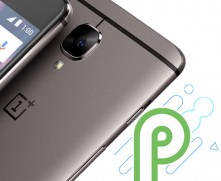 OnePlus say its OnePlus 3 and OnePlus 3T phones will both be updated to Android P. The company had originally said updates for these phones, which are two years old, would stop with Android Oreo. They currently run Android 8.0. OnePlus says it will skip the Android 8.1 update and go straight to Android P. “After internal discussions and evaluation, we have decided to focus our development resources on the Android P project instead of upgrading the device to Android 8.1, so that we can offer more exciting features and improvements for our OnePlus 3 and 3T users,” said the company. OnePlus says the OnePlus 6 will be the first device to receive Android P, followed by the OnePlus 5/5T, and finally the OnePlus 3/3T. OnePlus didn’t say when these updates will arrive.